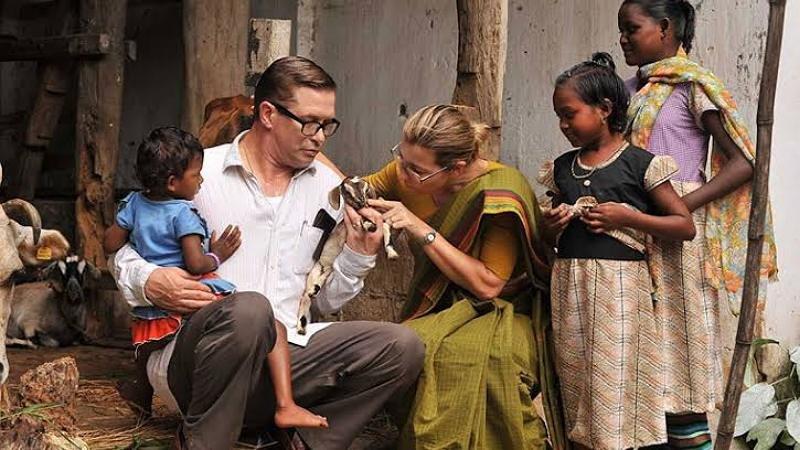 GRAHAM & GLADYS STAINES
Missionaries to Orissa
Dr. Graham Stuart Staines was an Australian Christian missionary, born
on 18th January 1941 at Palmwoods, Queensland, Australia as the
second child of William and Elizabeth Staines. His mother Elizabeth was
a godly person, she had a great influence on the life of little Graham. At
the fifteen years old, a visiting missionary made a slide presentation
about people who suffered from leprosy. That is when he saw the
photograph of Josia Soren, a boy of approximately his age, suffering
from severe leprosy. Filled with sorrow and compassion for those
suffering from leprosy and because of his profound love for God, he
decided to dedicate his life to serve God by serving leprosy patients.
The specific call to serve the leprosy patients in India came two years
later, as his devotional reading on Christ, coincided with a missions
meeting where the speaker challenged the attendees to serve the people
with leprosy in the villages of Mayurbhanj, a town in Orissa, India.
Interestingly, his tryst with the village that he would later call his home
began in the year 1956. After eight years, Graham decided to visit India.
On his 24th birthday, on 18th January 1965, he arrived in India. As
Graham walked the streets of Baripada in Orissa, his heart melted at the
hapless plight of the people suffering from leprosy. He showed a deep

commitment to God and men and had a clear missionary vision. He felt
deep in his hart that it was his divine call and commission to
communicate the love of Christ to the untouchables of the community
by serving them. He joined the Evangelical Missionary Society of
Mayurbhanj in 1965 and started his work with leprosy patients. He learnt
Oriya, Santhali and Ho, the languages spoken by the local villagers and
tribal people. As a matter of fact, even the Government authorities
banked on him for composing a song in the Santhali dialect, to
popularize the polio immunization drive among the tribes.
Being fluent in local dialect, he began his outreach into villages with the
message of cross, lifting up Jesus among the tribal people of that area.
He assisted in translating a part of the Bible into the Ho language,
including proofreading the entire New Testament manuscript.
During the month of June in 1981, while Graham was working with
leprosy patients in Baripada, in Mayurbhanj district in the state of
Orissa, there was a tall beautiful and soft-spoken lady who involved in a
youth mission in Australia came to Baripada and circumstantially met
him. Graham married Gladys in 1983, in Australia and returned to serve
in India together and they worked together since then. Gladys, who was
trained as a nurse, was an apt and suitable helper for Graham at the
Mayurbhanj Leprosy Home. This sacrificial couple made their home in
an old house within the mission compound in Baripada and chose a very
simple lifestyle. They had three children, a daughter, Esther Joy and two
sons, Philip Graham and Timothy Harold. His family-life also stands as a
shining example.
When the couple was working in Orissa, there was fire in Baripada
leaving at least 100 dead and scores horribly burnt. The local hospital
failed to cope and the Staines couple – Gladys, a trained nurse, spent
nights nursing the injured. The couple took part in Pulse Polio
immunization drive. Graham distributed the leaflets while Gladys drove
the jeep in Baripada to create awareness.
Graham was never into controversies. All he did was – spreading the
message of the Lord. Orissa is a devout Hindu state but Graham as a
Christian preacher worked among the people who suffered from
malnutrition and illiteracy. Graham used to visit jungle camps to instruct
tribals on a range of subjects from public health to the Bible. On the
night of January 22, 1999, Graham had attended a jungle camp in Manoharpur, which is a tribal area. He was on his way with his sons,
who had come back on holiday from their school in Ooty. They broke the
journey for the camp to sleep in the vehicle due to severe cold. His wife
had stayed back in Bripada. A murderous crowd, who were not happy
with Graham as around 22 families had converted to Christianity, set fire
to the vehicle in which the father and the two sons were sleeping. The
three of them were burnt alive. More than 10,000 people attended his
funeral. Gladys Staines, the widow of the slain missionary, said that she
had forgiven the killers and had no bitterness for them. She sang the
song “Because He lives” at the funeral of her husband and two sons.
In her affidavit before the Commission on the death of her husband and two sons, Gladys Staines stated: “The Lord God is always with me to
guide me and help me to try to accomplish the work of Graham, but I
sometimes wonder why Graham was killed and also what made his
assassins to behave in such a brutal manner on the night of 22nd/23rd
January 1999. It is far from my mind to punish the persons who were
responsible for the death of my husband Graham and my two children.
But it is my desire and hope that they would repent and would be
reformed.”
“I have forgiven the killers and have no bitterness because forgiveness
brings healing and our land needs healing from hatred and violence.
Forgiveness and the consequences of the crime should not be mixed
up,” said Ms Staines. She also said,” God has forgiven me and expects
His followers to do the same. The Bible says: “To whomsoever you
forgive their sins will be forgiven. Therefore, in the light of eternity we all need forgiveness of our sins to enter heaven.”
Dr. Graham Stuart Staines spent nearly 35 years of his life serving the
people with love, extending the grace of our Christ and had been
working in Orissa among the tribal poor and especially with leprosy
patients since 1965. The Evangelical Missionary Society in Mayurbhanj
(EMSM), where Graham and Gladys were serving was founded in 1895
by Kate Allenby. The work focussed on serving those affected by
leprosy and other impoverished and outcast peoples; and on planting
and supporting local churches. A succession of missionaries served the
mission and, by the time of the Graham’s death in January 1999, it
comprised a Leprosy Home (with 70 residents) and farm, a Rehabilitation
Community and farm (approx. ten families), two mission compounds and around 27 churches.

After Graham’s death, Gladys continued to live in India caring for
leprosy patients until 2004 before going back to Australia. Shortly after
the sentencing of the killers, Gladys issued a statement saying that she
had forgiven the killers and had no bitterness towards them. Her
forgiving the assassins sent waves across the world and Christ had
been proclaimed on the front pages of the newspapers in India. In the
face of persecution, many have come to Jesus from families that have
rejected the gospel for years.
In 2004, she decided to return to Australia to stay with her daughter and father. She however said that she would continue to look after the
people she and her husband had been looking after so far. In 2005, she
was awarded the Padma Sree, a civilian award from the Government of India, in recognition for her work with leprosy patients in Orissa, India.