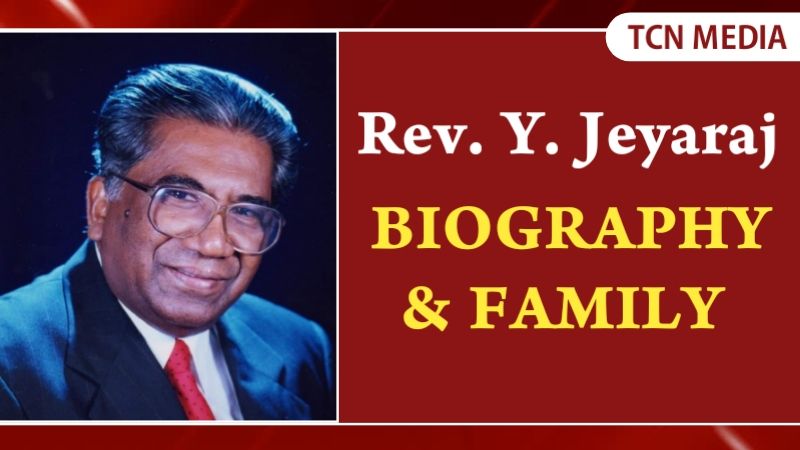 Pastor Jeyaraj was born on Sept 8, 1928 in a small place near Nazareth in Southern Tamil Nadu, India. He was the eldest son of Mr. K. Yesudian and Mrs. Thangamma who raised him up in a strong Christian environment. The young Jeyaraj gave his life to Christ, at the age of eight when he had a vision of Jesus Christ and then was filled with the Holy Spirit when he was ten. On July 3rd, 1949, after the dedication of the new church at Kanakkapillai Valasai, he was given water baptism by Rev. Robert W. Edwards missionary to India with the Assemblies of God USA .

The very next day, on 4th of July, 1949, the 20 year old Jeyaraj entered full time ministry as an interpreter to Rev. Edwards. From then on, he worked closely with the missionaries, especially Rev. Robert and Doris Edwards based out of K.P. Valasai, spreading the gospel and planting churches all over Tamil Nadu, India.

In the year 1950, pastor Jeyaraj received his credential as a Christian worker with the Assemblies of God. This is just a humble beginning for a lifetime of path breaking Christian service and ministry for 64 years. Rev. Jeyaraj served as the secretary of the Tamil District Council of the South India Assemblies of God (S.I.A.G.) in the year 1958.

1959, he was elected as the Superintendent of the Tamil District Council. He served well in that capacity till the year 1998, for 39 years, pioneering several Assemblies of God village churches, and raising hundreds of servant leaders for the Kingdom.

He also served as the Chairman of All India Pentecostal Fellowship, providing much needed leadership and encouragement to so many pastors and Christian leaders all over the nation.

The Southern Asia Bible College conferred him with an honorary doctorate in 1997 for his extensive and influential service for the Assemblies of God churches. Apart from his leadership responsibilities, he has traveled extensively to more than 50 countries preaching the word of God. He was a man of great faith and prayer, always interceding for God’s people and working hard to fulfill his God given vision of planting churches and raising leaders in every part of the nation.

Pastor Jeyaraj married Sis. Rajamma Mathew on November 29, 1952. God blessed their family life and granted them with five wonderful children. Robert Jeyaraj, the eldest son served as the General Superintendent of Assemblies of God North India (A.G.N.I) for many years and is currently the General Treasurer of Assemblies of God India (A.G.I). He pastors a vibrant church, Global Christian Life Center in New Delhi. As the Principal of Central Bible College, he is committed to training church planters and leaders for the great harvest in North India. He is married to Patricia and they have three children: Kimberly married to Noah Sheets, Marsha, and Robert Jr.

The second son, Stephen Jeyaraj serves as the Assistant General Superintendent of Tamil Nadu. He also pastors three churches in the Tenkasi area of Tamil Nadu and serves as the Principal of Trinity Bible College for Women at K.P. Valasai. He is married to Nirmala and they have three children: Stephanie married to Enoch Charles, Stacy, and Joshua.

The third son, Ebenezer Jeyaraj serves as an evangelist and is Founder and Director of a Children’s home in Madurai, Tamil Nadu. He is married to Hepzibah and they have three children: Ernest married to Jeeva, Jeffrey, and Lynetta.

The fourth son, Earlraj taught at the Tamil Nadu Bible college in Madurai for many years and then became pastor of an English and Tamil congregation in Boston, MA U.S.A. He went to be with the Lord in April, 2020. Earlraj was married to Vimala, and they have two daughters: Belinda married to Gabriel George, and Sharon.

The only daughter and youngest of the five, Helen is married to Benjamin Adam who serves as the senior pastor at First Assembly of God church in Madurai. They have three children: Benson married to Priyadarshini, Kristine married to Sam Arul, and Benita.

Mrs. Rajamma Jeyaraj went to be with the Lord on January 21, 1991 after thirty-eight years of joyous married life. Those others who preceded Rev. Y. Jeyaraj were his beloved parents, his two brothers, Mr. Moses and Mr. Johnson, and two sisters, Mrs. Jebakani Jacob and Mrs. Gloria Adam.